This article was written by CSU Libraries on April 26th, 2016.

“In general, maps and aerial photographs are not easily discoverable by potential users and can require extensive assistance from library personnel to identify and access,” said Fresno’s project members Carol Doyle and David Drexler, and Patrick Newell, who was recently named Dean of CSU Chico’s Meriam Library. 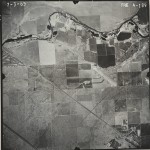 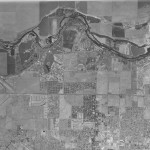 To address the growing need for accessible aerial images, the group used a wide-format scanner and vacuum wall to photograph delicate images. Project members then digitized thousands of aerial images spanning decades of historic development in the Central Valley. After this initial processing, Fresno State developed the Map and Aerial Locator Tool, or MALT, a map interface able to identify aerial images by year for a given area.

“We had long dreamed of an online, end-user accessible, interactive, map-based locator tool that would facilitate searching for maps and aerial photographs corresponding to a specific user-defined location: one search finding specific location matches across different flights, individual maps or maps series, and collections,” the group added.

Cal Poly’s unique, indexed, and suitable aerial image sets from various years were another reason why the campus was a perfect partner for the project, according to Russ White, Kennedy Library Numeric and Spatial Data Specialist.

“Fresno has the hardware and the expertise to do the scanning, so our role revolved around providing the content and methodology for streamlining this project,” White said.

By combining digitization capacity, new content, and best practices, Fresno and Cal Poly are motivated to expand this successful pilot to content held in Cal Poly’s Special Collections and Archives, regional local history partners, other CSU libraries, and other organizations with historical images.

“The more collections and collaborators added, the more useful the tools will be.  We have spoken to University of California libraries, public libraries, government agencies, and historical societies about the project and are interested in furthering those conversations,” Fresno State said.

MALT as a model

Ultimately, the team believes this proof-of-concept project can serve as a model for other libraries and agencies to identify, process, and provide access to historical maps and aerial imagery not currently available for web mapping and research.

In addition to creating a platform and method for other organizations, this ongoing project aims to develop MALT metadata for eventual inclusion in broader catalogues and searches, such as Open Geoportal.

“I hope to see MALT as something that can eventually be integrated into a larger catalogue or group,” said Jeanine Scaramozzino, Data Services Librarian and a project leader at Cal Poly. “Joining forces and working cooperatively is not always easy to do but I think this is a good example of how CSU campuses can work together.”